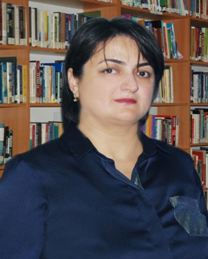 In 2000   she graduated from   the bachelor   degree of Azerbaijan State   University of Economics   with honors   and entered the Master’s degree of the   same university.

In 2002 she   graduated with honors from the Master’s Degree.

In 2002 she was a post-graduate student at Azerbaijan State   University of Economics.

In 2010, she defended her thesis   at   Economic Institute of ANAS and received a PhD in economics.

In 2000-2001, she worked as chief inspector at the department of Science at Azerbaijan State University of Economics.

From 2001 to 2013 she worked as a lecturer   at the department of “Business Administration”.

In 2015, she was awarded the UNEC Honorary Decree for her scientific and pedagogical activity and active participation in the university’s public life.

Since 2017 she has been the assistant professor at the “Economics” department of the Russian   School of Economics   of UNEC.

She is the co-author of more than 70 scientific works, including two textbooks and the author of a training   aid   devoted to the actual problems of the national economy. She is a member of the Editorial Board of a number of scientific journals.