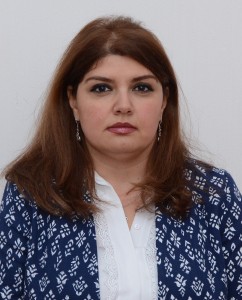 She was born on January 1, 1975 in the Goychay region of Azerbaijan Republic.

In 2008 – she defended her   dissertation   on “Improvement of preparation and preparation of qualified personnel in the conditions of various economic forms”, and received a PhD  in economics. (08.00.05 – Economy and management of the national economy).

2013-2015 – Associate Professor at the department of   “Economic Theory2” of Azerbaijan State   University   of Economics.

2015-2017 – Associate Professor of the department of   “Theoretical and Practical Economy” of   Azerbaijan State University   of   Economics.

2017 – Associate professor of “Economics” department of Russian  School of  Economics of Azerbaijan State University of Economics.

In 2017 she works as the head of the “Economics” specialty at the department of “Economics” of the Russian   School of Economics of   Azerbaijan State University of  Economics.

Number of published works: 48.
Including:
in the Republic: 40
abroad: 8
Course Material: 1
Methodical resources: 2
Educational program: 3
She took part in translation of   7 textbooks.

In December 2016, taking into account   her effective scientific and pedagogical and labor activities at UNEC she has received a message of thanks.