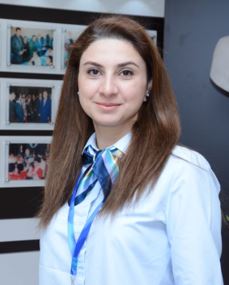 In 1996 he finished school with a biology-chemistry bias with excellent marks.

In 2002 he graduated from the Azerbaijan State University of Economics with a master’s   degree in “Regulation of Economy ” specialization “Pricing”.

In 2012, he defended his dissertation on the theme “Methods of using the price factor in the protection of internal market protection and provision of economic security” at Azerbaijan State University of Economics and successfully passed the dissertation on the specialty 5308.01 “General Economy” by the decision of the Higher Attestation Commission under the President of the Republic of Azerbaijan.

She is a Ph.D. in economics sciences program on “Directions for increasing payable demand in agricultural market” since 2014.

In 2001-2014 she has worked as a senior laboratory assistant at the Department of “Price and Pricing”.

From 2018 to present she is the senior teacher at the Department of Economics and Management at the International Masters and Doctorate Center, as well as the Program Manager on “Economics”, “Statistics”, “Organization and Management of Industry” qualifications.

Since 2017, she has been teaching “Price and Pricing” in the UNEC SABAH Groups.

She has been a member of the UNEC Board of Young Teachers’ Council since 2017.

Since 2018, she has been a member of the Young Scholars Council of UNEC.

In 2011, she was honored and awarded among the Ph.D. students in the Republican Scientific Contest “Heydar Aliyev and 20 years of Social-Economic Development of Independent Azerbaijan”.

In November 2017, she was ranked third in the scientific articles contest among university professors, doctoral students, young researchers, masters and students within UNEC’s “Science Month”.

She has taken part at the international conference titled “II International Economic and Administrative Perspectives (CIPEP) Sustainable Global Competition”, organized jointly by UNEC and Suleyman Demirel University in Isparta, Turkey, in 2017 with a report “Analysis of the role of demand (consumable and payable) in the formation of  competitive economy in Azerbaijan”.

In 2018 she participated in the UNEC Experience Program at Istanbul University, Turkey.

In 2018 she made a report at the International Strategic and Social Research Symposium in Istanbul, Turkey and became a section moderator.

She has participated in Basics of using the Web of Science base in 2017 UNEC, Clarivate Analytics; UNEC, Clarivate Analytics, “Mechanism for publishing key research results in international authoritative publications in 2018″; In 2018, the “Contemporary Teacher’s Individual Work Plan (Syllabus) Compilation” , and also in a number of other trainings organized by the Ministry of Education of the Republic of Azerbaijan, ADA University, SABAH Center and received certificates.

She has ranked  the 79th in 2016-2017,but for  2017-2018 academic year she was in the fifth place in  the ranking table in the “Differential salary system of professor-teacher staff” of the Azerbaijan State  University of Economics.

She is the author of 85 scientific works (including methodical instructions and co-authorship in one textbook), including articles published in scientific journals included in the Web of Science (including 5 articles) since 2001, including Azerbaijan and abroad.