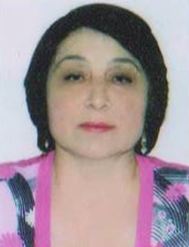 She left  school in 1967, and in 1973 from the faculty of Chemical Technology of the Azerbaijan State Oil Academy.

Since 1997 she has been an associate professor  at  Baku State Commercial Institute of Commodity Studies, and since 2000 at  Azerbaijan State Economic University.

She is currently an associate professor at the department of  “Engineering and Applied Sciences”, UNEC.

She is the author of about 60 scientific works, including 3 certificates of authorship, 5 patents (foreign), 12 articles (domestic), an article (foreign), 27 theses, a textbook, 3 teaching aids, 4 programs.

She has two children.