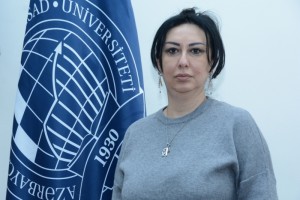 After finishing  school  in  1982  I entered the institute  of  Foreign  Languages  (The  English Faculty).

In 1987 I graduated from the institute (university)  of  Foreign  Languages vith the diploma of the Pedagogical  Faculty of  English I German languages.

During my  teaching  practice I  published  for  about  20  articles  (in Baku  city),  some  of  which  were the  materials  of   Foreign  Conferences.