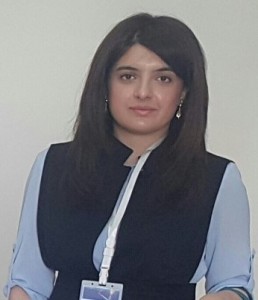 Rahmani Farah Polad was born in 1990 in Baku.

In 2012 she   worked   as a laboratory assistant, senior laboratory assistant,    teacher at the department of “Enterprise Economy” at UNEC. In 2014, she was appointed as a candidate for a degree to the department of “Enterprise Economy”   on   the   specialty  of  “Organization and management of industry”. She conducted hourly-graff lessons at UNEC   in 2013-2016.

Since 2017 she has been working as a lecturer   at the “Economics” department of the Russian School of Economics at UNEC.

In February 2016, she participated in a training on “Interactive education in the university system” held by UNEC and was awarded 1st place in the group. She   is the author of 8 scientific articles.