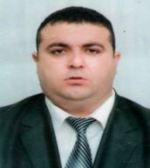 He received a Bachelor’s Degree from the Academy of Administration under the President of the Republic of Azerbaijan in 1994-1998.

In the years of 1998-2000 he got a Master’s Degree in the Academy of Administration under the President of the Republic of Azerbaijan.

He has been a nominee doctor of the Department of “Management and Entrepreneurship” of the University of Economics in “Management” since 2007.

Mursalov is a teaching staff of the Department of “Economic Law” of the University of Economics since 2002.

He is the author of 6 scientific and methodological works.