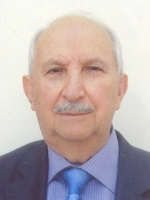 “Head of the Department of “Labour economics and organization”, Prof. Guliyev Tofig Avaz

He was born in Aghdam region in 1935. He completed Khindiristan secondary school in Aghdam region in 1953 and in the same year he was admitted to Azerbaijan National Economy Institute named after K.Marx. He graduated from the specialty of “Industrial economics” with honours diploma in 1957.

He worked in the position of engineer – economist in Azerbaijan State Institute of Industry and Design in 1957, senior economist in Industry – repair department of the Ministry of Agriculture of Azerbaijan in 1958, chief inspector of higher schools department of Higher and Secondary Specialized Education Commission of Azerbaijan SSR in 1964, senior teacher and socciate professor in Azerbaijan State University named after S.M.Kirov in 1965, in the following years he worked in the position of associate professor, professor, head of department in Azerbaijan National Economy Institute (from 1970) up to date. He is an author of more than 500 scientific – methodical works, monography, article. He published books “Labour economics” (30 c.v) in 1972, “Scientific organization of labour” (25 c.v) in 1974, “Principles of management” (21 c.v) in 1993, “Principles of management” (second edition) in 2001-2006, “Sociology of labour” in 1998. Problems of interests was published in the most authoritative publishing house “Мысль” of Moscow in 1967, monographies dealing with labour reduction were published in 1974. He was full time postgraduate student of the “Labour economics” department of Moscow Institute of National Economy named after G.V.Plekhanov in 1966-1963, and he defended candidate dissertation there in 1963, in 1968 he defended doctoral dissertation.

He has been an honoured scientist since 1992. He is a member of Council of Experts of Higher Attestation Commission on economics; he was awarded “Glory” order. He was a member of Presidium of International Union of Economists in 1990-1998. In 1963 he was a member of Union of Journalists of SSR. He was awarded the “Gold pen” prize in 2010. His 3 books were presented to the readers in more than 30 countries of the world, as well as in the library of Harvard University.