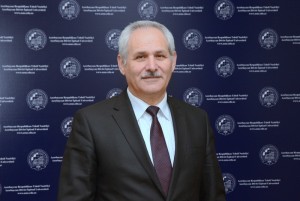 S.M. Yaqubov was born on July 1, 1953. He graduated from secondary   school in 1969 and   the same year entered the full-time department of Azerbaijan Institute of National Economy named after Dadash Bunyadzadeh. In 1973, he graduated from the same institute with a degree in Statistics. He served in the military in 1973-1974.

In 1975-1977 he worked as an economist, chief economist and director of the “Agricultural Statistics” department of  Central Statistical Office of  Azerbaijan SSR (now  State Statistics Committee of the Azerbaijan Republic).

In 1977-1980 he studied full-time in graduate school and in 1980 he defended his dissertation   titled  “Economic and statistical study of labor productivity in livestock” on  Statistics at  Moscow Institute of Economics.

In 1980-1990 he worked as an instructor and senior instructor   at the “Statistics” department of AINE named after Dadash Bunyadzadeh and  Baku branch of  Leningrad Institute of Finance and Economics.

In 1990 he was admitted to the full-time doctoral program of   Moscow Institute of Economics and Statistics on the basis of a competition announced in the former USSR. He studied there in 1990-1993. In 1993, he defended his doctoral dissertation on “Methodology for statistical assessment and analysis of livestock development in Azerbaijan” in “Statistics”.

Professor S. M Yaqubov has been the Vice-Rector for Science and Innovations of   Azerbaijan State University of Economics since February 2018. At the same time he is 0.5 staff professor.

S.M.Yaqubov is the author of more than 115 scientific- methodical   works totally 125 pp. in volume dedicated to actual problems of statistics, including 2 monographs – “Economic problems of livestock development”, Azerneshr, Baku 1986, 8 pp., “Development trends, strategies and problems of the Azerbaijani economy in 1990-2000″, Baku 2001.He is also the author of some books (10.8 pp.). His more than 15 scientific articles have been published in foreign countries.

Professor S.M. Yaqubov is currently the only doctor of sciences in the Republic of Azerbaijan majoring in Statistics.