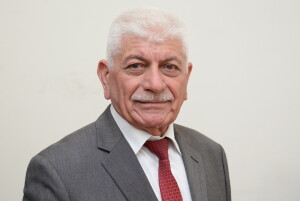 He was born in Aligasimli village of Jalilabad region of the Republic of Azerbaijan on July 12, 1947. In 1965 he finished secondary school No:1 of Jalilabad city with excellent marks.

In 1990 after graduating from Baku branch of Saint Petersburg State University of Finance and Economics named after N.A.Voznesenski, he defended candidate dissertation on “Formulation of tax system in the countries with transitional economies”, first time within CIS countries. After graduating from doctoral degree of Saint Petersburg University of Finance and Economics of the Russian Federation in 1997 he defended doctorate dissertation for getting the title of Doctor of economic sciences. In 1999 passing through attestation of State Attestation Commission under the President of the Republic of Azerbaijan, he get the Doctorate diploma.

Since 1993 he has been engaged in scientific-pedagogical activity. He is the first Doctor of sciences, professor of the “Finance” chair of ASEU since 2000. Since 2001 he is the member of Dissertation Councils of Azerbaijan State Economic University and Azerbaijan National Academy of Sciences, established for granting titles of Doctor on economic sciences and candidate on economic sciences.

He is the author of more than 86 scientific works, including 5 monographs, 9 textbooks, 3 methodical, 18 education program and 2 interactive textbook with edition of 255.2 printed pages. 12 persons defended dissertation for candidacy under the leadership of professor M.Kh.Hasanli, and he was opponent and reviewer of more than 10 candidates and doctorate dissertations  Currently, he leads 5 doctorate and 5 candidates for a degree.

From 1970 till 1978 work executor, chief of the field, chief engineer at the Special Construction installation organizations of the USSR;
From 1978 till 1982Chief of the department, deputy head of the bank at Baku City branch of the USSR Construction Bank;
From 1982 till 1984Deputy chairman of Execution Committee of National Deputies Soviet Executive Committee of Baku city Khatai region- chairman of Regional Plan Commission;
From 1985 till 1992 Head of the Financial department of Khatai region of the Ministry of Finance of the Republic of Azerbaijan and the chief of Tax Inspectorate;
In 1992 Section director of strategical economic programs at the President Apparatus of the Republic of Azerbaijan;
In 1993 Head of the Main Budget Department of the Ministry of Finance of the Republic of Azerbaijan;
From 1994 till 1999 Chief of the State Tax Inspectorate of Khatai region of Baku city;
From 2005 deputy head of “Finance” chair;
Since 2013 till nowadays, he has been head of the “Finance” chair of ASEU.