In 1994 she graduated from school N 171 in Baku with honours and entered the faculty of “Philology of the English language” of the Azerbaijan University of Languages.

In 1998 she received a Bachelor of Arts, in 2000 a Master’s degree in the English language and graduated from Azerbaijan University of Languages with honours.

In 2001, 2002 she worked as an English teacher at Azerbaijan University of Languages.

Since 2003 she has been working as an English teacher in the chair of “Foreign Languages” of the Azerbaijan State University of Economics.

In 2014 she was appointed senior teacher of the chair of “Foreign Languages” of UNEC.

She actively attended methodology development and teacher training courses organised by English and American trainers and received certificates. She proved her professionalism  by getting high points in the monitorings held in UNEC.

In 2014 I.Ganiyeva became a doctoral candidate of the Institute of Linguistics of the Azerbaijan National Academy of Sciences and her speciality was language theory. Dealing with her dissertation, she published many articles in local and foreign scientific journals. 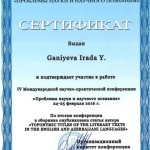 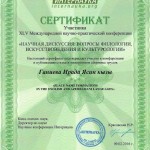 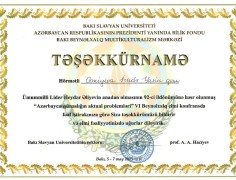 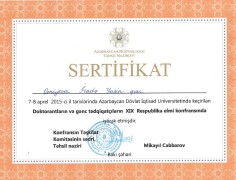