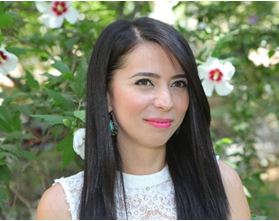 She was born on November 11, 1987 in the Stepnov region of the Stavropol district of the Russian Federation.

In 1994-2005 she had a secondary school at the school № 109 of Nizami district of Baku city, in 2005-2009 a Bachelor’s degree in Mechanical Engineering at Mechanical Mathematics Faculty of Baku State University, in 2005-2009 she received a master’s degree in Mechanics of Deformable Mechanics of Mechanical Mathematics at Baku State University. After graduating master with a differing Masters Degree, she continued her PhD degree at the same University’s Philosophy Program in 2011-2014.

In 2012, she graduated from tutor’s course at Baku State University with a honor diploma and in the 2012-2017 she worked at the Baku State University’s Master and Doctorate department as a 1st Degree Academician adviser. At the same time, she has served as an operator at the Online Graduate Student  System of the DIM (former TQDK).

From September 20, 2017, she was appointed to the position of the teacher at the Department of “Technological Machines and Field Equipment” by the order of the Rector of the Azerbaijan State Economic University №713 / 3/2017.  She is the author of 7 published scientific articles and 1 conference material reflecting scientific and pedagogical activity.

Since 2013, she is a member of the New Azerbaijan Party.

She is married, has a daughter. 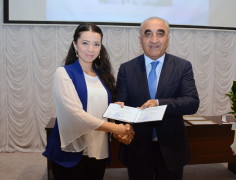