Rzayev Ramiz Mursel oghlu was born on November 8 1938 in the town of Ordubad of Nakhchivan OR of Azerbaijan Republic.

He graduated from the Azerbaijan State University named after S.M.Kirov in 1961.

He served as a credit inspector (Economist) at Azerbaijan branch of the State Bank of USSR.

Within 1965-1968 he was a post graduate student the Economic Institute of AR Academy of Sciences and was sent on business to the Institute of the National Economy of Moscow named after G.M.Plekhanov.

R.Rzayev defended his Candidate’s paper in the February of 1969 and became Candidate of Economy.

Since 1969 he began to serve at the department of “Finance and Credit” first as a teacher, senior teacher; currently he is the Assistant Professor of the department.

R.Rzayev has prepared a training facility “Basis of Banking” in 2014.

He is married, has got two children and two grand children. 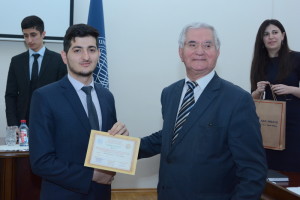