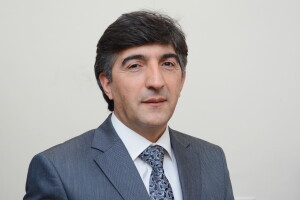 Head of the Department of “Physics and chemistry”, Dr. of Ph. S., Prof. Rzayev Rovnag Mirza

He completed secondary school in 1986 and graduated from the faculty of Physics of BSU.

He was full time postgraduate student of the faculty of Physics of BSU in 1992-1995.
He worked in Baku Institute of Commodity Research and Commerce in 1996, has been working in ASUE since 2000.

He is an author of more than 140 scientific works, as well as, 65 articles which 25 of them being in Journal Impact (foreign) Factor, nearly 20 International (foreign) and more than 45 local conference materials, 2 training aids, 8 programs and methodical aids. He was awarded the honours certificate of the Ministry of Education of Azerbaijan Republic.