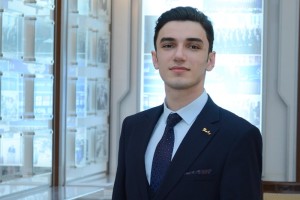 He is a third year student of the faculty of Finance and Accounting.

Since November 2019 he has been working as a student -rector.

Student-rector of Azerbaijan State University of Economics (UNEC) is elected among the full-time undergraduate students (except IV course and above) of the university for a year.

Student-rector is one of the administrative bodies of the university with equal rights. He is a right of participating in the performances of UNEC‘s Academic Council and other structural units, including discussion of the students’ interests and in making decisions.

Student-rector implements the functions of representation and expert in connection with issues of establishing mutual relations with the relevant bodies on student affairs and constitutes the interests of the university and its students within the powers given to him in making ties with other higher education institutions.