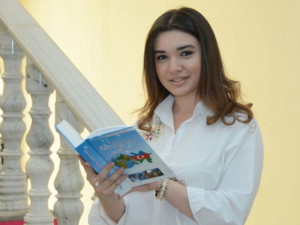 She was born on January 22, 1999 in Baku. In 2005she entered the first grade of secondary school № 150. Since 2007 she has continued her education at the International Educational Complex 132-134. In 2012, took the 1st place at the scientific-practical conference of schoolchildren of Baku on the topic “Academician Hasan Aliyev and Nature of Azerbaijan”. In October of the same year at the National Azerbaijan Literature Museum named after Nizami Ganjavi at the event dedicated to the 130th anniversary of Huseyn Javid she was honored with the Honorary Decree on artistic reading  by deputy R.B.Huseynov. In 2014, she participated in the XI pupil-student scientific conference dedicated to the 91st anniversary of the National Leader Heydar Aliyev and was awarded the Honor Diploma. That year she fulfilled  the project of  “ Junior Achievement ; Azerbaijan’s Successful skills “ with a successful completion certificate . In 2014, her interview titled “I want to be MP” was published in the newspaper “Teacher of Azerbaijan”. In May 2014 being the captain she won the VII Intellectual Olympiad of the Modern Education Complex named after H.Aliyev. In 2015 she became the winner of the I Internal Debate Form organized by UNEC and IEC № 132-134. She was awarded the III place at the Drawing Competition in the Czech Republic that year. *

He finished IEC 132-134 in 2016 with a special certificate.  That year she entered the faculty of World Economy at UNEC. In 2017, being the first of the faculty she won the first place at the UNEC Science Slam International Science Competition. At the final stage, she was awarded III place with her research on gender equality.

Since September 2017 she has worked as director of the International Relations Department of the Student Scientific Society. She also has worked as the chairman of Science Slam Commission, participated in the Crypto-Seminar held by the SSS in November of the same year, and was awarded with a certificate by the Student Scientific Society chairman A. Azimzadeh.

Since march 2018 she was appointed as the Vice Chairman of the UNEC Student Scientific Society. She took part in the II International Conference of Young Researchers in April 2018 and published her article. A scientific article titled “The Process of World Economy Formation and Integration into International Economic Relations” has been adopted and will be published on “The IV International Conference on Economics and Business”, which will be held in Budapest, Hungary, on June 27, 2018.