On May 18 UNEC’s team became the winner of the Republic Sports Competition held among the employees of higher education institutions on Volleyball.

The Competition was devoted to the 93rd Anniversary of the National Leader Heydar Aliyev’s Birthday. The team consisting of UNEC’s teachers won the tense competition to the teaching staff of Azerbaijan State Academy of Physical Culture and Sports in 2:0.

It should be noted that our team beat the team of Azerbaijan State University of Culture and Art in 2:0 on May 17. The coach and captain of the team consisting of UNEC’s instructors is Vahid Yolchuyev.

We congratulate our team! 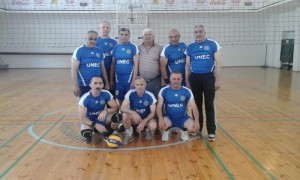