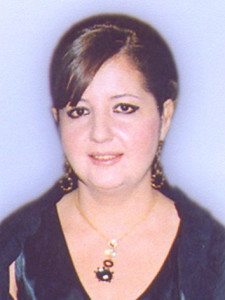 Jafarova Diana Hidayat kizi was born on August 30 1972 in Baku.

She studied at the School of History of Baku State University in 1989-1995s.

In the years of 1990-1994 she served at the Department of “General History” of Azerbaijan State Pedagogical Institute as a laboratory assistant.

Within 1994-1998 she worked as a senior laboratory assistant at the Department of “Humanities” of Baku Institute of Commodity Research and Trade.

D.H.Jafarova began to serve at the Department of “Humanities” on technological specialties of Azerbaijan State University of Economics in 2000.

Since 2005 she has been working at the Department of “International Relations”.

In 2007 she supported her Candidate’s paper on “Military Case and Armaments of Karabagh Tribes in Late Bronze and Early Iron Age”.

She became the Assistant Professor by the Scientific Council of ASUE in 2010.

Currently she conducts trainings on “History of Azerbaijan World Economy History” in English at the Special Talents Group.

She was selected the Head of the “Center for Gender Researches” where has been serving as a researcher for many years.

D.H.Jafarova is an expert on Gender for OSCE.

She is married, has got a child.