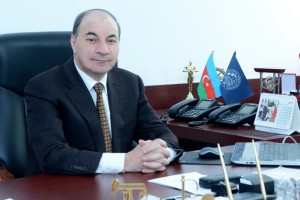 Head of the Department of “Finance and Financial Institutions” Dr of Econ. Prof. Avaz Akbar Alakbarov

Avaz Alakbarov was born on July 23, 1952 in Western Azerbaijan. After graduating from secondary school, he entered   Azerbaijan Institute of National Economy in 1969 and graduated from accounting and economics faculty of the same institute in 1973. After   getting the specialty of economist,   he   worked as an accountant-bookkeeper at   Baku General Construction Department. Then he went to military service.

He was appointed Finance Minister of the Republic of Azerbaijan by National Leader Heydar Aliyev in 1999. He has been in this position for 7 years. He has made efforts to form economic policy in the republic, to establish budget-tax, monetary and social policy. Under his direct initiative and guidance, the first “Tax Code”, “The Law on the Budget System” and “the Law on Social Insurance” were developed and implemented. He was a member of   state   and government commissions. He represented our country at international, bilateral interstate conferences and events in the US, UK, China, Turkey, Switzerland, Belgium, Norway, Russia, Saudi Arabia, Denmark, India and other countries. As the co-chair of the Azerbaijan-US Intergovernmental Economic Commission, he has   services in  establishment   of   economic   relations. He was the director of   International Monetary Fund, Islamic Development Bank, Black Sea Trade and Development Bank and Asian Development Bank   for Azerbaijan. He was the Chairman of the Supervisory Board of the International Bank of Azerbaijan and the United Universal Bank (Kapital Bank).

On September 30, 2003, at the Institute of Economy of Azerbaijan National Academy of Sciences, in Baku ( the theme of “Problems of Formation and Development of Social Insurance in Azerbaijan in Market Conditions” (scientific supervisor: famous economist, Doctor of Economic Sciences, Professor, Honored Scientist Tofiq Guliyev, official opponents: doctor of economics, professor Kamil Shahbazov, candidate of economical sciences, associate professor, Adila  Gozelova, leading organization, Russian Academy of Labor and Social Affairs) he defended dissertation and received the title of candidate of economic sciences. On January 15, 2008, he defended his doctoral dissertation on “Problems of financial and budgetary regulation of socio-economic development” at the One-off dissertation Council, established by the Supreme Attestation Commission under the President of the Republic of Azerbaijan (official opponents – correspondent member of ANAS Ali Nuriyev, , professor Mammadhasan Meybullayev and doctor of economic sciences, professor Rafig Aliyev, executive director of Economic Research Institute of Economic Reforms of the Ministry of Economic Development of the Republic of Azerbaijan), received the title of  a doctor in economics and got engaged in scientific activity. He is the author of more than 70 scientific works, including 4 monographs, a bibliographic book, a textbook and a   training aid. Candidate’s dissertation as well as doctoral thesis was carried out at the Institute of Economy of ANAS. He has more than 500 articles on social, political and economic issues in the world and country press. From February 2016 he is the head of the department of   “Finance and Financial Institutions” of   Azerbaijan State University of Economics and the Chairman of the Presidium of the Board of Professors. He contributed to   PhD students and candidates   as a scientific supervisor and scientific adviser to obtain a 5 PhDs in economics and 2 doctoral degrees in economics. He was given the title of professor on the department of Finance and Financial Institutions in 2019 by the Decree of the Presidium of the Higher Attestation Commission under the President of the Republic of Azerbaijan. Together with the co-author, the monograph “Anatomy of the global economic crisis” was published in a number of circulations in the authoritative “Economy” publishing house in Moscow. (Reviewers:  the head of the department of “World economy” of the Russian University of Economics, named after Plekhanov, corresponding member of the Russian Academy of Sciences, professor Khasbulatov R.I.  and   director of the Scientific Research Institute of Finance University under the government of R.F, Honorary Economist, Professor Perskaya V.V). A full-text scientific article was published on the Web of Science with co-authors on the theme “Investigation of the Composite Index of Financial Stability Assessment of the Banking Sector” at the 37th International Conference on Social-Economic Problems of Sustainable Development. On May 15, 2019, he was awarded the United Nations “Peace Ambassador” title for his contributions to world science and economy.

20th of 2017, by order of the President of the Republic of Azerbaijan, he was given the honorary title “Honored   teacher” for his effective activity in education of Azerbaijan.

He knows Azerbaijani, Russian and Turkish languages. He is married. He has two children and grandchildren. 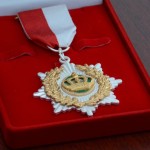 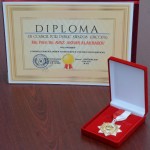 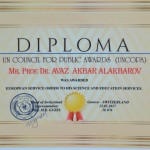 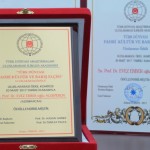 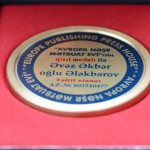 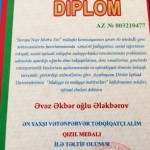