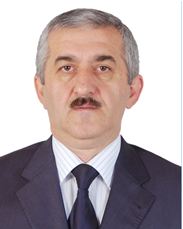 He was born in 1963 in Tirjan village of Ismayilli region. He went to first class in 1970 in Gakh, and in 1980 graduated from high school with excellent marks in all subjects. The same year he entered  Azerbaijan Polytechnic Institute (now Azerbaijan Technical University). She was awarded a special scholarship named after Ch. Yildirim for her excellent education and active social activities in high school. In 1985 he graduated from the Institute with honors.

From 1985 to 2001, he held various positions at the “Ulduz” Scientific Production Association, including the supervisor, the master, the deputy chief of the department, the head of the measuring devices department.

He has been working as a lecturer, senior lecturer at the department of Standardization and Certification of Azerbaijan State   University of Economics   since 2001 and is currently an Associate Professor. He received his PhD in Technical Sciences in 2007 and an Associate Professor in 2016.

He was sent to Gazi University in Turkey in 2013 as a participant in the Mevlana Exchange Program and participated at the lessons on undergraduate and graduate levels.

He is the deputy head of the department, a member of the UNEC Master Center and the Scientific Council of the Faculty of Expertise and Standardization. He was repeatedly thanked by the university administration for his differences in scientific and pedagogical activities. He is in the top thirty in the 2016/2017 and 2017/ 2018 academic year in the ranking table of the academic staff   in the UNEC differential salary system.

He is the author of more than 100 scientific and educational-methodical works, including 1 textbook, 6 manuals, 1 monograph, 3 methodical instructions and 25 subject programs. He has repeatedly participated in international scientific conferences. Four articles were published by SCOPUS, three articles by Clarivate Analytics (Thomson Reuters), and one in EBSCO Academic Search Complete journals.

Married and has 3 children.