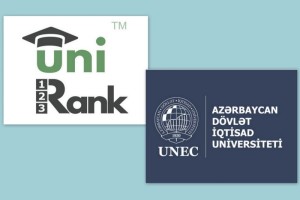 uniRank: 225th in the world, 27th in Asia, the first university in Azerbaijan – UNEC. UNEC has got this success in the” World University Rankings” announced by uniRank rating organization in February 2020.

In the  ranking as a result of analysis of more than 13,000 institutions of higher education officially registered in over 200 countries UNEC is ranked 225th in the world, jumping 497 steps from last year.

UNEC has been the first in Azerbaijan in this ranking.

It should be noted that uniRank, published twice a year since May 2005   is an international higher education directory and search system containing an analysis of the website’s popularity   of accredited higher education institutions worldwide. The rating covers 13,600 universities and colleges worldwide.

The UNEC brand is recognized in Europe
Astrakhan State University will cooperate with UNEC
UNEC will cooperate with Gaydar Institute of Russia
International Conference is held on “Digital Economy: Modern Challenges and Real Opportunities”
«Triangle of education» : A special program dedicated to the 90th anniversary of UNEC
UNEC jumps 497 steps in the world rating
ALL NEWS