Rector of UNEC Adalat Muradov: “Universities should focus not only on knowledge but also on values” 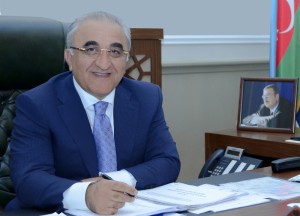 “Although the problem of shadow economy is paradoxical, it has been created by professionals who are the product of the education system as a whole and is tried to be settled by  those specialists. This fact reaffirms the contradiction in education; it shows that the education system is still weak in   transmitting other qualities of it to graduates, except knowledge, I would like to say values of it.

I am sure you will agree with me value of education is the most important moment, in terms of the digital economy and secret economy we are discussing today. It is no coincidence that I began my speech with values in education. Universities should focus not only on knowledge but also on values and pay more attention to ways to ensure it.

It is well-known that the imposition of values by force is always a failure. Let me finish my speech with a thesis from Jeff Bezos, CEO of Amazon, in 2010 at Princeton. His speech is called: “It is our choices that make us.”

Bezos begins his speech with a sad story. Bezos was 10 years old when he travelled with his grandparents. He estimated that smoking 2 minutes reduced his grandmother’s life by 9 years. When he told his grandmother about it, his grandmother cried. His grandfather stopped the car and told   Bezos in a mild manner: “You will never realize that being kind is harder than being clever.”

Speaking of this event, Bezos said: “Mind is talent, and goodness is choice. Everything about talent is clear and  simple, it has been given to us. But choice may be very difficult.”

We are confident that universities should help their students to master this fundamental difference and encourage students to be picked not only by their mind, but also with their kindness. I think that’s the main task today. ”

This was stated by the rector of Azerbaijan State University of Economics (UNEC) Professor Adalat  Muradov at a joint event titled “Struggle against the shadow economy as  an important factor of economic development,”  at the event jointly organized by the Ministry of Taxes, the Union of Economists of Azerbaijan and the Chamber of Auditors of the Republic of Azerbaijan.

“II International Scientific Conference of Masters and Doctoral Students in Economics and Management” is held dedicated to the 90th anniversary of UNEC
UNEC joins “CIMA-Emerging Leaders Competition 2020”
Admission to the MBA program at UNEC will be held in 3 new specialties
Advantages of MBA program of UNEC Business School: QUESTIONS AND ANSWERS
“The Fourth Industrial Revolution” by Klaus Schwab in the Azerbaijani language
Contributions from UNEC students to the 97th anniversary of the national leader: concert, competition, video
ALL NEWS