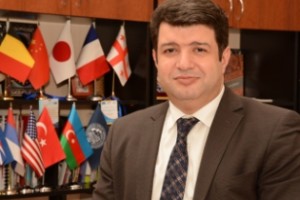 Doctor of Economics, Professor Muslum Azad oglu Ibrahimov was born on September 3, 1974 in the city of Baku of the Republic of Azerbaijan. He graduated from the Russian State Agrarian University named after K.A. Timiryazev (RGAU-TSXA). In 1997 he entered full-time postgraduate study at the Department of Agricultural Economics of RGAU-TSXA. In the same period, on a voluntary basis, he served as an assistant to the Attache for Education in the Embassy of the Republic of Azerbaijan.

In 2000 he defended his thesis and from the side of the Higher Attestation Commission of the Russian Federation he was awarded the academic degree of candidate of economic sciences (PhD). In 2001 he served as Deputy Director of No. 32 “Bakimühəndistikinti” in the capital city of Baku. Since 2002 he worked as a senior research fellow at the Institute of Economics of the National Academy of Sciences of the Republic of Azerbaijan. In 2003, from the side of the presidium of National Academy of Sciences, he was elected the Head of the Department “Problems of Industry and Investment Policy”.

In 2004, he was invited to the Azerbaijan State Economic University for the position as head of the department “Preparing Foreign Students” and an associate professor of the Department of International Economic Relations. In 2005, the Higher Attestation Commission of Azerbaijan awarded the academic title “Associate Professor”.

He is a member of several international associations. He was awarded from the “Advanced Worker of Education” by the Ministry of Education Azerbaijan Republic.

He is a member of the Dissertation Council.

In 2016, at within of the Fulbright program, Visiting Scholar taught and conducted research at US universities. He has participated on the ERASMUS + program, participated in the international mobility of staff.

Author of more than 100 scientific articles and abstracts, as well as 5 monographs published in different countries.

He spoke with the WTO and UNCTAD.

The UNEC professors in the TV programme “Economy of the Day” (19.04.2018)
The Russian rector says: “The Russian Economics School of UNEC will give the impetus to the science and education areas”
(07.12.2017)
UNEC Expert speaks about Azerbaijan – Poland Cooperation (30.06.2017)
Which Products can be introduced to Foreign Markets? – UNEC Experts’ comments (25.04.2017)
ABŞ-ın Azərbaycandakı səfiri UNEC aliminə sertifikat təqdim edib (27.09.2016)
UNEC’s Teaching Staff has spoken about Garabagh in Texas (06.04.2016)
UNEC’s Teaching Staff has made a speech at the West Texas A&M University (04.03.2016)
UNEC’s Instructor lectures in the prestigious US University (10.02.2016)
ASUE International Relation Department Director, Dr. of Economy Muslim Ibrahimov’s Interview to the Newspaper “Khalq Qazeti” (10.06.2015)