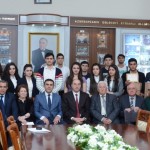 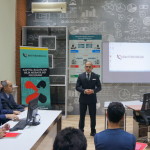 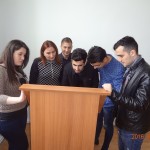 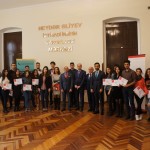 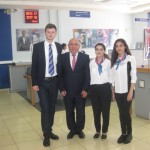 The research of the UNEC scientists: “The improvement of deposit insurance business” (16.04.2018)
The article of the UNEC scientist won the international competition (21.12.2017)
The consulatations on the preparation of tax-related training materials have started at UNEC (13.11.2017)
“I feel proud of my Native University’s this day!” (10.07.2017)
UNEC Scientists at the International Scientific Conference (29.06.2017)
“Honorary Ambassador of the Culture and Peace of Turkish World”- UNEC’s Head of Department (01.05.2017)
UNEC Professor spoke about the International Monetary and Credit Relations in Saint-Petersburg (27.03.2017)
UNEC and the Training Center of the Ministry of Taxes start trainings (07.02.2017)
A Seminar held at UNEC: Development of Financial Services will provide the Sustainability of the Real Sector (19.01.2017) 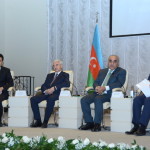 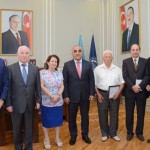 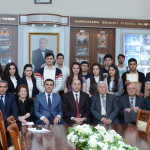 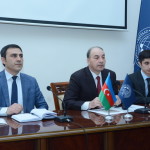 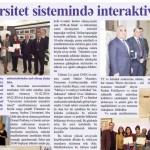 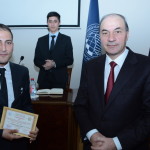 In order to effectively manage and organize teaching at the University, the Departments of Banking, Finance, Tax and Taxation were abolished by the Scientific Council’s decision of the University of Economics made on 2 5.12.2015 and on the basis of these chairs the Department of “Finance and Financial Institutions” was established on. 03.02.2016.

The history of the previous department of “Finance” was closely linked to the faculty of Finance and Credit. In all years of existence of the University of Economics, regardless of its name, the Department of Finance and Finance continued its activities.

After the AINE had left the composition of ASU in 1966, the department was functioning under the name of Finance-Credit. Since 1983, with the purpose of increasing the teaching load and to make the development of specialists in banking and money circulation more productive the department of “Finance” was established. At present, the chair continues its activity with this name. The department mainly trains specialists for financial institutions, as well as tax, insurance and customs systems.

The laboratories “Virtual Budget Survey and Insurance” are performing under the Department.

Previous Department of “Banking” was founded in 1983 on the basis of the chair “Finance-Credit”. During the period, the department was called “Money circulation and credit”, in 1990 “Bank operations and money circulation” and in 2004 “Banking business”.

The Previous Department of Taxes and Taxation was established on the basis of a cooperation agreement signed between the Ministry of Taxes of the Republic of Azerbaijan and Azerbaijan State Economic University on 19 November 2001. The Department was run by a corresponding member of ANAS, Dr. of Econ., Prof. A.F.Musayev (2001-2007), Doctor of Economic Sciences Yasar Atakishi oghlu Kalbiyev (2007-2015).

For those who are studying for bachelor’s degree, the teaching staff of the department translated and published textbooks and facilities “Tax system”, “Theoretical and methodological bases of taxation”, “Tax service of the Republic of Azerbaijan: reforms and results”, “Tax culture”, “Economic problems of tax policy” Taxation, Taxation and Taxation in Azerbaijan, Taxes and Taxation, Budgeting Systems, Implementation of Offshore Mechanisms in International Taxation,”Tax Administration”, “Economic Growth and Taxation “,” Tax system of local self-government bodies”,  “Taxes and taxation of the economy “, «Налоги и налогооблоcение в Азербайджане» and prepared with the help of the Ministry of Taxes Training Center Programs for teaching methods on “Tax Administration”, “Tax Planning and Forecasting” and “Tax Systems of Foreign Countries”.

Students who are studying for bachelor’s and master’s degree in tax administration and management are trained in the relevant departments of the Tax Department of the Ministry of Taxes, Tax Audit Department and Special Regulatory Tax Service Department.

Scientific articles of the staff of the department are regularly published In the newspapers “Taxes” and “Tax News of Azerbaijan” published by the Ministry of Taxes and in other publications.

During the period of his activity, the staff of the chair published 11 textbooks, 5 textbooks, 8 teaching aids, 3 monographs, subject programs and many scientific articles.

Department of “Taxation and taxation” has been actively involved in the implementation of scientific research works since its inception. During the period of its activity, the main directions of the scientific activity of the department were determined, theoretical and methodological and methodological issues of determining the tax burden, which is the basis of tax policy, were studied. The role of tax burden in determining tax policy in the Republic of Azerbaijan at the present stage has been studied, the influence of the factors shaping the tax burden on budget revenues has been studied and evaluated, the main directions of tax policy of the state are defined, and the model reflecting the interaction of tax burden and economic growth parameters has been established. Here are also the ways to stimulate the development of the sectors by using tax burden and tax regulation in the Republic of Azerbaijan were investigated, the main criteria of financial and economic activity of the enterprises and fiscal policy of the state, tax burden analysis in other spheres of material production, budgetary Revenue forecasting was carried out.

Actual problems of the tax policy and tax system, which are the main scientific direction of the department, are currently the most complicated economic reforms in our country. Theoretical and general issues of the problems are constantly being studied, studied by economist scientists of our country, and keeps their relevance today. From this point of view, almost scientific schools have been established in this area, the dissertations covering different areas of taxation and taxation have been defended, scientists have grown up.

Fiscal policy plays an important role in raising the country’s financial potential and its application remains relevant. In order to solve this problem, the research work on “Tax policy of the Republic of Azerbaijan and its improvement in modern conditions” was carried out. Theoretical and methodological bases of tax policy were examined, modern tax policy of Azerbaijan was analyzed and its role in socio-economic development of the country was determined, directions of tax policy applied against the financial crisis and directions of improvement of tax policy in modern conditions were mentioned.

Scientific- research works on “Taxation of financial and credit system organizations and leasing operations tax”, “Taxation of commercial and service sectors” and “Taxation of construction companies” are carried out.

Majors provided by the Department: