An Intellectual Competition held at UNEC

VII “Native Language” Cup of an intellectual competition “What? Where? When?” organized by the Students Trade Union Committee has been held at the Russian School of Economics of Azerbaijan State University of Economics (UNEC).

Beside the UNEC Intellectuals, representatives of other higher education institutions and members of the teams who were the champions of the competition held among banks participated in the contest dedicated to two significant celebrations of the Republic of Azerbaijan- the Constitution Day and the National Revival Day. The establisher of the Cup, author of the question package, Deputy Director of the Russian School of Economics, senior teacher of the Department of “International Relations”, member of the Intellectual Games Club “Turan” Anar Eyyubov tried to attract in young people the interest of Azerbaijan history, culture, science and the processes of modern politics.

The representatives of the training center “WORLD” providing financial support to the tournament said they will present a chance of attending a foreign language course free of charge to the owner of I place and a chance of discount to the owners of II and III places.

The team HD became the winner of a tense competition. II place was won by “Revolver” and III by “NIK”. The winners were introduced the works of the writers whose names were mentioned in questions. 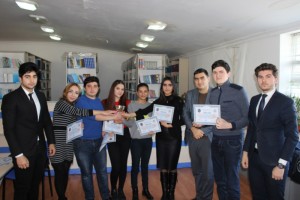 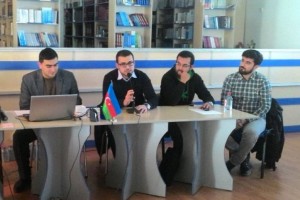