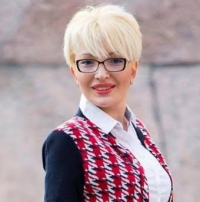 Vusala Mammadova has worked in PR since 2007.

Is in media since 2009. She is the author of artistic and journalistic articles and projects. Many articles have been published in literary collection published in Turkey.

Became the winner of the competition “The shortest story’ held by the cultural circle of Kullis.az in 2014.

She is the author of the Projects “Captive Camp” and “Boarding-school drama” broadcast by lent.az. A book “A Huge Scream in the Hell” developed on the basis of stories of “Captive Camp” was published in 2015 and “Captive Camp” in 2017. Her play “Red Angel in Khojali” based on the stories has been staged in “Teatro Filodrammatici” of Milan city, Italy.

Awarded the prize “Hasan bay Zardabi” founded by the Association of Azerbaijan Journalists in 2015.

She was awarded the prize “Education Key” presented by the Education Center for Youth, the newspaper “Caspi” and the campaign “My education, my Future” for her activities carried out in increasing the awareness among the young people in 2015.

She began working at the Marketing and Communications Department of the Azerbaijan State University of Economics from 2014. She managed the division of Public Relations in this department until September, 2018.