In addition, a series of information is reflected in the ranking about UNEC. This include the information about the history of UNEC, student and teacher capacity, education provided by, library, sport services, exchange opportunities and the percentage of admission and so on.

Note that, UNEC became 3318th among 12,358 universities and colleges. The Massachusetts Institute of Technology is on the top of the list.

Detailed information on the ranking can be acquired from the link: www.4icu.org/reviews/180.htm

About uniRank: UniRank, published twice a year-in January and July since 2005, is a higher education directory and a search engine containing analysis on the higher education institutions’ web popularity accredited over the world. Ranking covers 12,358 universities and colleges of the world.The objective of the uniRank is to reflect the popularity of the world universities’ webpages. It provides the opportunity to obtain information about how the university or college is popular for the international students and academic staff in the country.

Ranking is made on the algorithm based on 5 independent web measurements obtained from 4 web sources. Moz Domain Authority, Alexa Global Rank, SimilarWeb Global Rank, Majestic Referring Domain, Majestic Trust Flow are taken as the components of uniRank and in general measures the number of the visits of the site, significance of the site, width of its views, the number of references and “unique” visits from the personal computers or mobile applications. SimilarWeb Global Rank is included here since 2017 and it covers the number of “unique”. 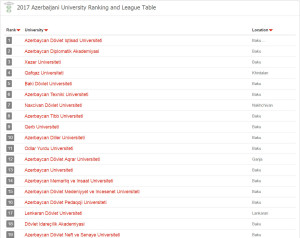