The international conference is over: the results of 510 scientific researches of about 700 researchers from 35 countries is presented to the public 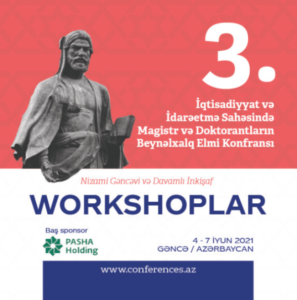 The 3rd International Scientific Conference of Masters and Doctoral Students in Economics and Management, jointly organized by  Azerbaijan State University of Economics (UNEC), the Ministry of Economy, the Ministry of Education and Ganja City Executive Power, with the general sponsorship of “PASHA Holding”, ended on June 7.

The 4-day conference on “Nizami Ganjavi and Sustainable Development” featured an online discussion of the results of 510 scientific studies conducted by about 700 researchers from 35 countries. In addition to the report sections, 16 workshops on topical issues with the participation of experts from various countries, the United Nations, the World Bank, the European Bank for Reconstruction and Development, universities, government agencies and the private sector, 26 foreign researchers, as well as scientific reports on topical and serious economic issues of 10 compatriots and Azerbaijani scientists, who continue their activities in prestigious universities of the world, were heard.

Workshops on “Smart and sustainable cities”, “Employment and investment in post-war Azerbaijan”, “Branding of cities in the example of Ganja”, “Digital economy in the modern world”, “Blockchain technologies and digital currencies”, “IV Industrial Revolution”, “Social business and social entrepreneurship Impacts on the economy ”,“ Prospects for e-commerce and e-exports in Azerbaijan ”,“ Green cities and green development prospects ”,“ Formula for academic success ”and on other topics were broadcast and discussed live on UNEC’s official Facebook page and YouTube channel and presented to the general public.

It should be noted that that the conference opened on June 4 in Ganja.

One out of every six people entering the master’s in the country chooses UNEC
Certificates are presented to graduates who successfully completed the Chinese language course at UNEC
Sustainable development and Creen economy research center named after Nizami Ganjavi is established at UNEC
Two diplomas for 4 four years at UNEC- IDD has been launched at UNEC
UNEC is awarded the reward of QS international rating company
Innovation at UNEC: Minor Education Program on major
ALL NEWS