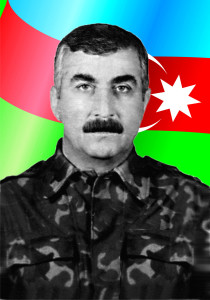 Jabrayilov Nazim Ibrahim oghlu was born on March 2 1949 in Aghdam. He graduated from the Faculty of “Economy of Trade” of Azerbaijan Institute of National Economy (current UNEC) in 1970. He was sent to work in Ashgabat of Turkmenistan. He worked in the DIA of Ashgabat. He got the second degree from the Kaliningrad Police School. He returned to Motherland after a while and started to work as a military engineer in the military vehicle group 2711.

Naim Jabrayilov always was one of the first defenders of the country on the frontline from the beginning of the Armenian aggression against Azerbaijan in 1988. Senior Lieutenant N.Jabrayilov who is actively involved in the battles for Garabagh was appointed platoon commander by the Minister of Defense. He was presented to the early rank of captain on April 13 1994 for the great courage and bravery demonstrated by. He was killed on April 18 1994.

Armenian aggressors did not return Nazim Jabrayilov’s corpse to his family.

Nazim Jabrayilov was awarded the highest award of the country- “Azerbaijan Flag” Order after his death.