Support to Azerbaijan from International Vision University of Macedonia 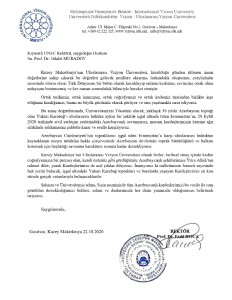 The rector of UNEC, Professor Adalat Muradov has received letters from the heads of partner foreign universities and international organizations in support of Azerbaijan in connection with the military conflict between Armenia and Azerbaijan.

The armed attack on defenseless and innocent people in civilian settlements in our country by Armenia, which has been occupying Azerbaijani lands for 30 years is strongly condemned in the letter addressed by Prof.Dr. Fadil Hoca, the rector of  International Vision University of Macedonia. It is stated that the defense operation carried out by the Azerbaijani state for its territorial integrity within the framework of international and self-defense law against the occupying Armenia is fully supported.

On behalf of Vision University, Prof. Dr. Fadil Hoca wished God’s mercy to our martyrs and healing to our wounded brothers. He expressed confidence that justice would be restored, Nagorno-Karabakh would be liberated from occupation and the real owners would soon return to their lands.

Virtual exhibition dedicated to January 20 National Day of Mourning at UNEC
A meeting is held with the chairmen of student organizations at UNEC
Conference at UNEC: “Fashion industry in the revival of Karabakh economy: real opportunities and prospects”
Trainings on “Social Work” are conducted by foreign scientists at UNEC
The UNEC scientist is elected a member of the Scientific Committee of an international conference
Discussions on faculty development strategies are being held at UNEC
ALL NEWS