Letter of support from TWRF to Azerbaijan: Brotherly Turkey is proudly watching the heroic struggle 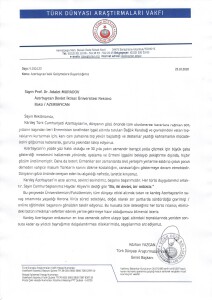 The letter says that despite all international decisions, brotherly Turkey is proudly watching the heroic struggle of Azerbaijan for the liberation of Nagorno-Karabakh and surrounding areas occupied by Armenians at the cost of its life since the 1990s. It is said that Azerbaijan’s attempts to resolve this struggle for peace for almost 30 years have not yielded any results, while the Armenians have targeted civilian objects, committed atrocities by shedding the blood of innocent people, not to mention children. This humiliation in front of the eyes of the world is condemned with hatred and curse.

Saying that ” Pain of fraternal Azerbaijan  is our pain, its joy is our joy,” Yazgan emphasized that being  “one nation, two states”, he is sharing our feelings .

The letter says that TWRF   is closely following the success of brotherly Azerbaijan in online education, both in wartime and under difficult conditions due to the coronavirus, and is ready to provide any support in this direction.

In conclusion, K.Yazgan wished the Azerbaijani army victory in a short time and the waving of the moon-star flag in the occupied territories forever.

Virtual exhibition dedicated to January 20 National Day of Mourning at UNEC
A meeting is held with the chairmen of student organizations at UNEC
Conference at UNEC: “Fashion industry in the revival of Karabakh economy: real opportunities and prospects”
Trainings on “Social Work” are conducted by foreign scientists at UNEC
The UNEC scientist is elected a member of the Scientific Committee of an international conference
Discussions on faculty development strategies are being held at UNEC
ALL NEWS