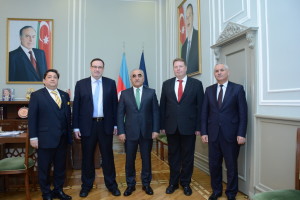 The Executive Director of Clarivate Analytics for Russia and CIS  countries Oleg Utkin, the Director in Educational Programs of the organization Valentin Bogorov visited UNEC.

The delegation meeting with the UNEC rector, professor Adalat Muradov exchanged the views on the coopertation between “Thomson Reuters” and the university. The main topic of the meeting was the scientific seminar, the organization of international conferenes and the establishment of the school for scientometrics.

O.Utkin, expressing his satisfaction with the purposeful steps taken by UNEC in the direction of becoming the university of international level, said that “Thomson Reuters” supported the projects implemented in this direction. He, highly appreciating the year over year growth number of UNEC publications in the influential scientific journals, stated that the university successfully integrated into the world science environment. Taking into consideration the influence of  UNEC in the scientific world, he emphasized the importance of establishing school for scientometrics here.

UNEC has prepared a virtual exhibition dedicated to the National Day of Mourning
The exams will be organized remotely for foreign students who are unable to enter the country
The rector of UNEC meets with the world champion and world record breaker
«McDonald’s» provides financial support to UNEC students with disabilities – Photos + Video
UNEC ranks first in “Employers’ Reputation” in QS Regional Rankings 2022
Opening ceremony of the UNEC Research Center for Sustainable Development and Green Economy Studies named after Nizami Ganjavi was held
ALL NEWS
- www.mersindugun.com - escort eskisehir - betasus güncel giriş -
betist güncel giriş
-