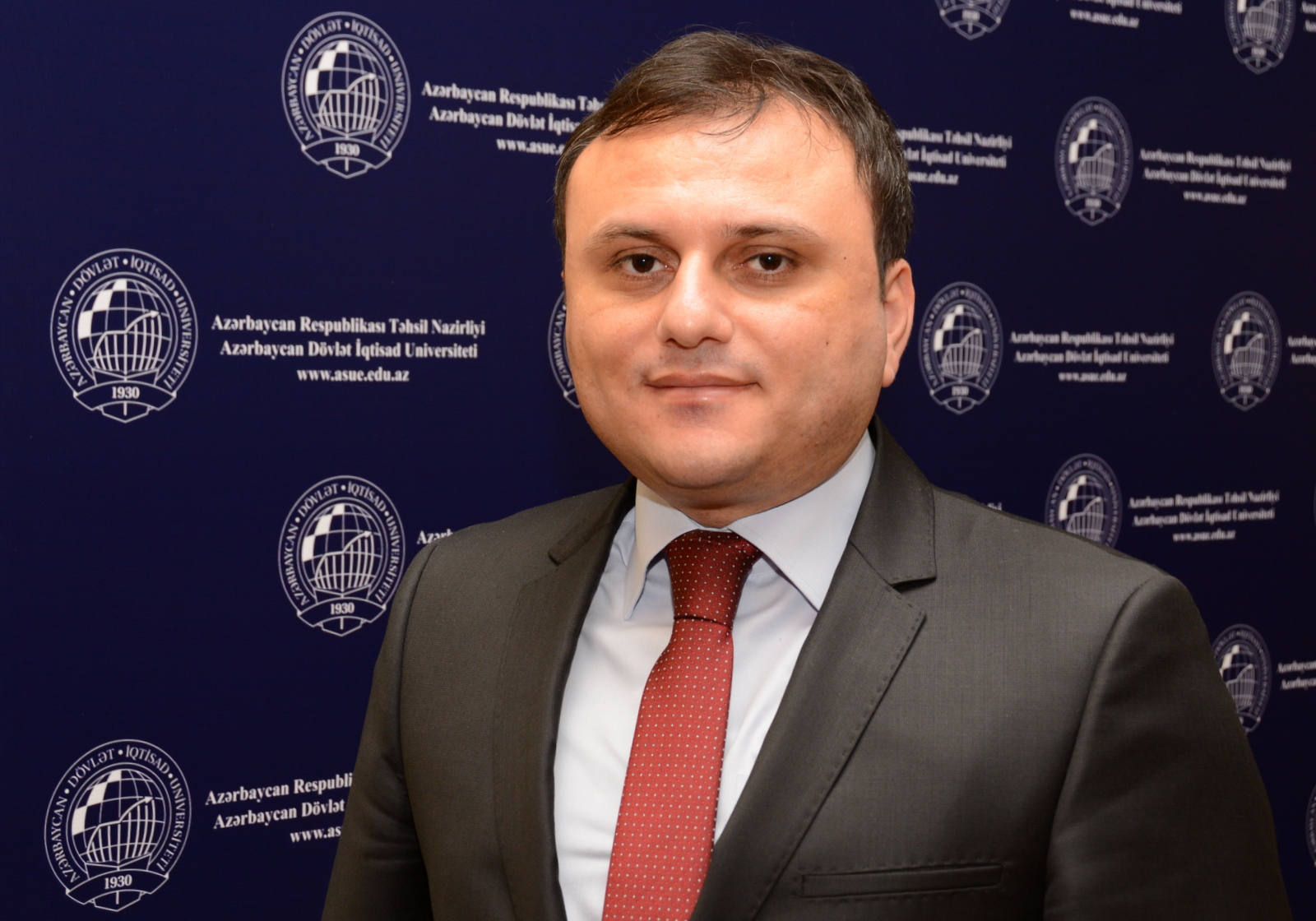 ElshanBaghirzade: “The differential payroll system applied at UNEC is an important contribution to the Modernization of the Higher Education in the Country”.

The differential payroll system has been applied at Azerbaijan State University of Economics (UNEC). Advisor to the UNEC’s Rector, PhD in Economy ElshanBaghirzade’s interview about the differential salary system:

– I suppose, firstly we should answer the question what is the differential payroll system. Thus, if we have a glance to the world experience each system determined on the basis of the employees’ activities is called the Performance Based Pay or Performance Related Pay System. The types of systems are generally intended to motivate the employees and divert their activities in line with the objectives of the enterprise. Payment is often realized with money, but in practice there are cases of using other possible variants than money. The kinds of payments are realized in the form of extra payments to the employee’s normal (basic) salary.

However, there are also such experiences when increases in the employees’ salaries are based on the type of systems. Although, the Performance- related Payment Systems gaining popularity in the 80th of the last century were mainly applied to the private sector, it is recently spreading in the public sector. Experience shows that the payroll systems of this type, if properly installed, often a kind of self- financing. Thus, the resulting improvements in the performance of employee by the system introduced bring the company more income than the additional payments.

Today the differentiated payment system based on the academic staff members’ activities is applied in different countries’ universities, including the USA and Europe, as well as in many universities of the fraternal Turkey. In our country also the formation of the type of systems are intended in the 7.2 paragraph of the Conception “Azerbaijan 2020: Vision to Future” adopted in 2012 and 2.3.1 and 5.10 paragraphs of the “State Strategy on the Development of Education in the Republic of Azerbaijan” adopted in 2013.

One of the main targets set by the Rector of our University, Professor AdalatMuradov is the establishment of differential wage system meeting the modern requirements at UNEC. Thanks to God, that as a result of intensive work we managed to establish the system and it began to be implemented at UNEC in 2015- 2016 academic year. So, for the first time in Azerbaijan, the differential salary system based on the evaluation of the academic staff’s scientific- pedagogical activity on the basis of the objective criteria and is sufficiently well advanced system went into operation namely at UNEC. I suppose this is an important contribution by UNEC to the modernization of higher education in Azerbaijan. I believe, UNEC’s experience will soon spread to other universities and will further contribute to strengthening the capacity of scientific and pedagogical staff.

- What is the purpose of the project?

- The system aims to differentiate the academic staff’s salaries estimating their activities on the basis of the objective criteria and to strengthen the promotion of their scientific- pedagogical activities in the direction of UNEC’s development goals. There is no doubt that any institution or organization, as well as UNEC has got development goals, even I would say there are very big targets. In this regard, the teaching staff is required to encourage research and educational activities in accordance with the objectives. This is an ongoing process. Changes in the direction of stimulating them to change the objectives of the university will be adequate.The system was the key in establishing this approach.

- The differentiated payment system is applied at UNEC for the first time. What was the ground for it?

- As I have noted in reply to the previous question, the application of the system aims to direct targets of UNEC to the main strength of UNEC- scientific educational activities of the teaching staff. For example, today we want to strengthen our position in the world academic ranking of top universities and one of the most important criteria for it is to publish articles in the prestigious journals and references to them. For this reason, an important role was given to encouraging the teaching staff’s activities in this direction in the differentiate payroll system. Similarly, there are a number of activities that we want to further strengthen at UNEC in the same direction and they are reflected in the differential wage system. In general, expectations from the system are expansion of activities at UNEC, increase in individual and group productivity of the teaching staff, creation of healthy competitive environment among them and increase the level of satisfaction with their work will improve the efficiency of teaching, research and administrate.

- You mentioned a little while ago, that the world experience was studied while preparing the system. Will the system applied at UNEC be the same of the world universities?

- Naturally, developing the system the experiences of the USA, Europe and Turkey and Russia have been studied and analyzed. But we must say that the philosophy of the system applied in UNEC is unique in terms of the planned activities and events even if it is similar to the analogical systems applied in the western universities. The system is developed in response to potential and existing development goals of UNEC. In this regard, I can say with confidence that the applied system is absolutely original. One of the main features that characterize its authenticity is the existence of its software and its functioning in electronic media.

- Does the system cover the entire teaching staff?

- How is the procedure of staff performance appraisal system done?

- The performance appraisal system of UNEC is carried out taking into account three main areas of activity- scientific, educational and self development. Scientific activities weight 40% of the total evaluation, educational activities 40% and self- development activities are 20%. “Teacher’s Annual Service Score” is calculated for each teacher on the basis of 12 criteria defined in all three areas. Each criterion incorporates a lot of activities and each criterion of has a significant weight in general assessment. The teaching staff’s annual ranking list is drawn up by numbering from the most superior to the bottom in the “Teacher’s Annual Service Score” to be applied to all members of the teaching staff. Ranking list on the teachers’ annual scientific- pedagogical activity scores are separated to the categories such as “excellent”, “very good”, “good”, “satisfactory”, “comprehensive” and “unsatisfactory”. The scientific- pedagogical activity of those whose university average index for “Teacher’s Annual Service Score” will be below 50% considered “unsatisfactory”.

- Which period of time will the Performance appraisal of the teaching staff be valid for?

- As I said, it is uninterrupted process. The teaching staff’s activity will be assessed for each academic year. Instructors will enter all the data about their scientific- pedagogical activities covering the academic year from September 1- June 30 and the system will prepare the rating list in accordance with the procedure I mentioned before. A point to note here is that the data is entered into the system, along with the supporting documents at the time. The inclusion of the data in the system still does not yet mean its adoption by the system. In this regard, we have created the “Permanent Commission on Staff Performance Appraisal in UNEC and the information will be accepted by the system after the commission will check the accuracy of the data entered on the basis of supporting document. In case the supporting documents of any scientific activity cannot be included into the system, the teacher introduces its original to the secretariat of the commission (UNEC Human Resources Department).

- Students will also have an opportunity to assess the teaching staff within the project. How will the procedure be conducted and the transparency be assured?

- The system is used in integrated manner with the “EDUMAN” system applied at UNEC carry out the electronic management of teaching. At the end of each term every student will fill in the “Student’s Assessment Survey on the Teaching Staff” from their personal cabinet. However, the teacher’s annual performance score is calculated by the system when the results will be used in electronic form. So the process is carried out in a completely transparent manner. Students will be able to assess their teachers absolutely freely. Here, there is no intervention by the teacher or any other administrator.

- Baghirzade, will there be a significant increase in teachers’ salaries as a result of the introduction of the system?

- Good question? Increase amounts intended to the teachers’ salaries under the system will be announced at the beginning of each academic year. These amounts may vary depending on the capabilities of the university over the years. This year, we have already announced the results. Thus, the teaching staff’s salaries in 2016/2017 will be increased in accordance with the annual average index score of more than 50% of the university within 2015/2016: salaries of the teachers ranking in 1-10 places will be increased 2 times, 11- 30 places 1.7 times, 31-60 places 1.5 times 61- 100 places 1.2 times.

- You do right points. As every teacher belongs to a certain department and faculty, UNEC prepares the ranking list of the departments and faculties according to their years of service. I think that is one of the system’s advantages. First of all, department and faculties will pave the way for the emergence of a healthy competition. At the same time, no doubt, the kind of rating lists will play a role of a serious source of information for effective decision- making about the teachers, departments, faculties and as well as the university administration. I can say with full confidence that the role of the information presented in this system will be indispensible for improving the management, especially for human resources of UNEC. As for the fate of those who have unsatisfactory ratings, vulnerability to say that the system is built to assess “satisfactory” as better and to improve “unsatisfactory”. But, if someone to be “improved” do not want it happen, is not willing to find out the potential, of course the university administration will have to make appropriate decisions in this case. Also, it must be taken into account that they will be deprived of the salary increases carried out within the differential payroll system.