UNEC in the World University Rankings 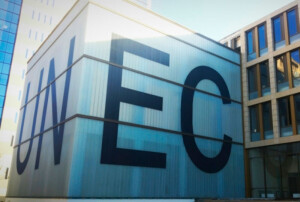 The ranking of world universities is determined on the basis of 5 indicators. The highest weight among the five indicators belongs to the “Academic Reputation” indicator. According to this indicator, UNEC is among the best 501+ universities in the world.

One of the high achievements of UNEC is its inclusion in the top 501+ universities in the world on the indicators of “Employers’ Reputation”. Thus, more than 450,000 businessmen and managers took part in the survey among employers.

One of the most important indicators in the QS world rankings is the “number of references”. This criterion has a weight of 20% and is calculated based on the number of citations to articles in the SCOPUS index over the last five years. According to this criterion, UNEC is among the  universities with the best achievements, 601+ in the ranking.

It should be noted that in 2020, compared to 2017, the number of references to articles of the academic staff of UNEC in the SCOPUS database increased by about 286%. 59.3% of UNEC teachers’ articles were published in Q3 and Q4 quartile journals, which had a high impact factor. Also, about 1/3 of the scientific works of UNEC faculty have been published as a result of joint research with international partners. This can be considered a clear example of internationalization in the field of scientific research at UNEC.

In general, UNEC is the only Azerbaijani university that has improved its position in the rankings of the GS rating organization in 2015-2021. Compared to 2020, UNEC achieved a better result in 2022, an increase of about 17%.

One out of every six people entering the master’s in the country chooses UNEC
Certificates are presented to graduates who successfully completed the Chinese language course at UNEC
Sustainable development and Creen economy research center named after Nizami Ganjavi is established at UNEC
Two diplomas for 4 four years at UNEC- IDD has been launched at UNEC
UNEC is awarded the reward of QS international rating company
Innovation at UNEC: Minor Education Program on major
ALL NEWS