UNEC has moved up 30 places in QS Regional ranking 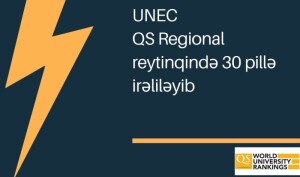 Azerbaijan State University of Economics (UNEC) is ranked among  221-230  best universities in the region in the ranking table for “GC Emerging Europe and Central Asia” region   for 2021 of QS ranking agency, which is 30 points higher than last year.

UNEC, which increased its scores on indicators compared to last year, has risen one place this year and became the second most ranked university in Azerbaijan. UNEC ranks first among specialized Azerbaijani universities.

The best result obtained by UNEC in the rating organization was on the indicator “Employer’s reputation”. UNEC, which achieved the 96th best result among the universities in the region, ranked first among Azerbaijani universities.

According to “Academic Reputation” indicator, UNEC, which advanced 17 places compared to last year, achieved the 136th  best result in the region and the second best result in Azerbaijan.