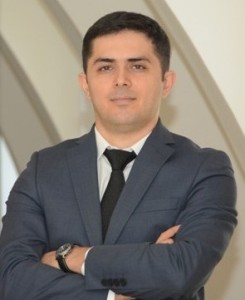 F.A.Guliyev finished Republic’s basic chemistry and biology-oriented lyceum 5 of Nizami district of Baku in 2001. The same year he was enrolled to the School of International Economics Relations of Azerbaijan State University of Economics with exam score of 663 out of 700. He was awarded a Letter of Gratitude from the Chairman of SCSA for his result. Fariz Guliyev attended the National Leader Heydar Aliyev’s meeting with the students. He graduated from UNEC’s Special Talents Group with honors in 2005. He was awarded a diploma for his speech on “The Role of Oil and Gas Resources in the Economic Development of Caucasian Region” made at the State University of Tbilisi.

He has attended a business education at the Rochester Institute of Technology (New York, USA) within 2006-2008 and was socially active within the period. He participated in the organizational affairs of Azerbaijan President Mr. Ilham Aliyev’s and state representatives’ official visit to the USA in Washington DC as a staff of Chamber of Trade in 2006.

F.A.Guliyev has graduated from the University of Alberta, Canada and received the MBA Degree in Natural Resources, Energy & Environment with the “State Program on Education of Azerbaijani Young People Abroad within 2007-2015” of the Ministry of Education of the Republic of Azerbaijan in the years of 2011-2013.

F.A.Guliyev is a Ph.D. in economics from Azerbaijan State University of Economics (UNEC) with concentration in fiscal policy and public finance.