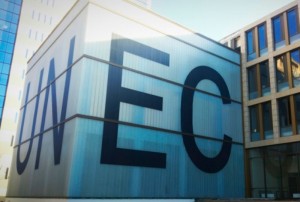 The QS Rating Agency’s ranking for 2022 on the “QS Emerging Europe and Central Asia region” has been announced.

UNEC is ranked 221-230 in the ranking. This year’s ranking includes 450 universities from the region. 7 higher education institutions from Azerbaijan were included in this ranking.

The best result obtained by UNEC in the ranking was on the indicator «Employers’reputation” (based on 20% metric). Thus, UNEC, which achieved the 96th best result among the universities in the region, ranked first among Azerbaijani universities.

UNEC has moved up 14 places in the Academic Reputation (30% ) indicator, showing the second best result among Azerbaijani universities and ranking 122nd in the region.

UNEC has prepared a virtual exhibition dedicated to the National Day of Mourning
The exams will be organized remotely for foreign students who are unable to enter the country
The rector of UNEC meets with the world champion and world record breaker
«McDonald’s» provides financial support to UNEC students with disabilities – Photos + Video
UNEC ranks first in “Employers’ Reputation” in QS Regional Rankings 2022
Opening ceremony of the UNEC Research Center for Sustainable Development and Green Economy Studies named after Nizami Ganjavi was held
ALL NEWS
- www.mersindugun.com - escort eskisehir - betasus güncel giriş -
betist güncel giriş
-