Statistics on the calls received by Call Center (“Hot line” service, phone: 146) of the Ministry of Education and also the services rendered to the citizens in Citizens Reception Center for February, 2016 was announced.

Most of the appeals covered the issues related to recognition (nostrification) of higher education documents (diplomas), recruitment and replacement of teachers, resettlement and rehabilitation to the local higher education institutions, exemption from tuition fee. 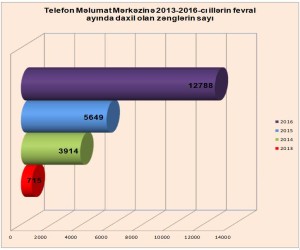