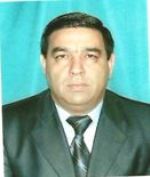 He was born in Garakhanbayli province of Fizuli region on January 15 1959.

He graduated the Azerbaijan Institute of National Economy (current Azerbaijan State University of Economics) in “Economy of Labor” with honors in 1980.

Within 1980 to 1991 he was sent to Baku Aggregate Production Unit and served there as an economist, senior economist, head of bureau, head of department.

He has been serving in the Department of “Economy and Administration of Labor” of Azerbaijan State University of Economics as an instructor, senior teacher and Assistant Professor since 1991.

He is the author of more than 40 scientific-methodological works. He published teaching programs and methodological instructions in “Human Resources Management” (2008), “Physiology and Psychology of Labor” (2013), “Income and Salary Policy” (2013) and “Ergonomics” (2013).

He served as a Deputy Director of Graduate Center of the University of Economics within the years of 2008-2010. He is currently in the same post since 2012.

He is married, has got three children.