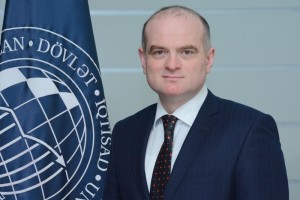 In 1992 finished Baku Secondary  School No. 42 with golden medal.

In 1997, he graduated from the Azerbaijan State University of Economics, the Faculty of Commerce and International Economic Relations with Honors.

In 1999-2004 years he worked as the senior assistant at the Azerbaijan State University of Economics, in 2004-2007 years as the senior lecturer and hold the position of associate professor in 2007-2015 years.

In 2007-2015 years, he worked in the position of deputy dean of the faculty of Commerce.

İn 2007-2015 years he also worked as the adviser of Minster of Communication and High Technologies(MCHT) of the Republic of Azerbaijan.

In 2003, he was the expert of the International Telecommunication Union (ITU), the headquarter of which based in Switzerland, and in 2002-2003 years he was the head of the working  group on the application of e-commerce in the Republic, as well.

In 2003, he successfully defended his candidate’s dissertation at the Dissertation Council of the Azerbaijan State University of Economics and in 2004, and he was awarded the degree of candidate of economical sciences by the decision of the Supreme Attestation Commission under the President of the Republic.

In 2008, by the decision of the Supreme Attestation Commission under the President of the Republic he was presented the certificate of associate professor.

On May 23, 2014 year he successfully defended his doctoral thesis for getting the degree of the Doctor of Economics in the Dissertation Council in the Institute of Economics of the National Academy of Sciences and was awarded the scientific degree of Doctor of Economics by the decision of the Presidium of Supreme Attestation Commission under the President of the Republic dated March 13, 2015 year. Currently, he is the youngest doctor of economics, professor in the Azerbaijan Republic.

He is the member of Dissertation Council operating in the Institute of Economics of the Azerbaijan National Academy of Sciences (ANAS) which organizes the defence of thesis for getting the scientific degrees of doctor of Economics and PhD in Economics and the UNEC Academic and Methodological Council. In January – May 2017, he held the position of Vice-rector for Sciences, professor at the Western University and worked as the editor-in-chief of the journal of “Scientific News” of the same university.

Since 2018 he has been working as the Deputy Director of the Russian School of Economics.

On July 17, 2019, by the decision of the Presidium of the Higher Attestation Commission under the President of the Republic of Azerbaijan, Elshad Mammadov was awarded the scientific title “Professor”.

He is the author of 8 monographs, 3 text-books, 2 study guides, about 200, including 100 international and including in the international reference database scientific publications.

He is also the author of thousands speechs on media.

He is also the economic  analyst and observer of a number local and foreign media.

The conference at UNEC: “The development of Independent Azerbaijan in figures” (24.11.2016)

Professor of UNEC spoke about the prospects of Azerbaijan’s regional cooperation (12.03.2018)