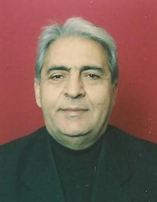 He was born on November 10, 1950 in Ayorta village, Bolinisi region of the Republic of Georgia.

In 1972 he graduated from   Azerbaijan   Institute of National Economy   named after D.Bunyadzade (now Azerbaijan State University) and worked as the inspector-accountant at the State Labor Savings Banks of Azerbaijan SSR on appointment.

In 1976-1979 he studied at   All-Union Agricultural Economics Institute, in 1981 he defended his dissertation. He is a candidate of economic sciences.

In 1974-1987 he worked as a junior   and senior scientific worker, scientific secretary and head of the department  at   Scientific Research Institute of Economics and Organization of   Agriculture   of   Azerbaijan Republic.

Since 2005 he is a member of the Azerbaijan Accounting Advisory Council.

Currently he is   Associate Professor of   “Accounting and Audit”   department of UNEC.

He is the author of textbooks, teaching aids, up to 100 scientific –   methodological and practical works.

In November 2017, he became a winner of   the article competition held among professor-teacher staff, PhD students, young researcher, masters and students within UNEC’s “Science Month” for   a scientific article titled   “Socio-Economic Development of Azerbaijan in the Context of Main Directions of Strategic Road Map in modern age”