A gift from the Chinese ambassador to UNEC 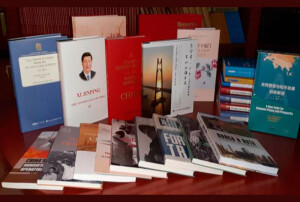 The Embassy of the People’s Republic of China in Azerbaijan presented books to UNEC on the occasion of the 29th anniversary of diplomatic relations between China and Azerbaijan and World Book and Copyright Day.

Books on the history, culture, literature, science, philosophy, politics, economy and technology of the ancient Eastern country have been submitted to the UNEC Library Information Center.

In a letter to the UNEC rector, Ambassador Extraordinary and Plenipotentiary of the People’s Republic of China to Azerbaijan Ms. Guo Min said the books would be important for readers to get acquainted with the rich history and culture of the ancient country of the Great East and closely follow the main development tendencies of modern China. The ambassador expressed confidence that the books would play an important role in strengthening mutual understanding and traditional friendship between the youth of the two countries.