Department for Organization and Management of Scientific Activities

First participants of the “Thomson Reuters” trainings are awarded Certificates (24.06.2016)
Georgy Tsagolov: “High- quality workforce is the foundation of successful economic reforms” (23.06.2016)
UNEC-də “Thomson Reuters”in “Web of Science” platformasının təlimlərinə start verilib (22.06.2016)
Training on “Web of Science” Certification Program will start at UNEC (09.06.2016)
A Conference at UNEC: “The Combination of Science and Education: Global Challenges and Local Opportunities” (07.06.2016)
Granting the right to publish teaching resources at UNEC are regulated in accordance with the international standards (01.06.2016) 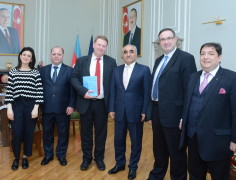 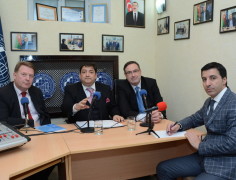 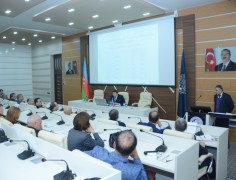 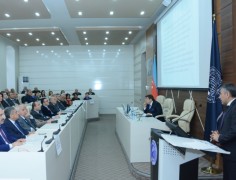 About the Department for Organization and Management of Scientific activities

To ensure the implementation of the resolutions of the Scientific Council dated 27.02.2018 and 29.06.2018 on the improvement of the management process at UNEC the Science and Innovation Center and the Science Departments have been abolished and on their base was established the Department for Organization and Management of Scientific activities. The status of Technology Transfer Center has been changed and from 01.10.2018 year it has been called the Department of Technology Transfer and has been included in the department.

Currently, scientific-research works are being undertaken at the University on 4 problematic subjects related to scientific-methodological aspects of a new socio-economic system:

*
The Azerbaijan State Economic University being the higher education institution in the field of economy with the largest pedagogical pool in the country is the strong scientific-research center.   In view of this, a lot of works have been undertaken in recent years in order to capitalize on that capacity to the maximum extend. Numerous priority directions have recently been determined in this direction. Followings can be cited among them:

International Scientific Conference on “Stable development of economy: problems and perspectives” is to be held

In recent years, a number of scientific conferences and events have been held with the organizational support of the Science section. Following can be highlighted among them:

The Science section carries out activities on three directions in order to increase and adjust quality of education to international standards, ensure close links between education and higher education institution’s science and further improve quality of scientific-research works:

*
In the last five years (2006-2010), more than 60 textbooks and manuals taught at leading universities of the world and written by famous economist-scientists have been translated into Azerbaijani language, more than 500 textbooks and training aids, 30 monographs, up to 800 methodical instructions and programs have been prepared at the Azerbaijan State Economic University. Furthermore, more than 2820 articles of professors-teachers of the University have been published, of which more than 530 articles have been published on prestigious scientific publications of foreign countries. Following can be cited among them: “The journal of economic sciences: theory and practice”, “International Journal  оf Computer Science Issues”, “Journal of Contemporary Applied Mathematics”.